Turkey Pen Gap was was much better in the DH direction.  See WTF I Need a Beer or 4 for details!  There still was plenty of hike a bike up Black Mounrtain from Claw Hammer Road.  Some on TPG itself and Cantrell (Can't Tell If if is a creak or a trail) Creak had a fair amount of Hike a bike as well, particularly with the 34X19t.  Funny it did not seem so steep on the way down, just the other day.  Squirrel Gap was pretty fun, but I was shot by then, but could still turn over that big gear, more like a slog.  Even the gradual South Mills River and Buck horn trails back to Claw hammer would probably have been more pleasant on a lower gear, though.  Broke a chain early and stopped to borrow a tube and pump to a guy from Indiana that left his in the car.  "Don't leave home with out your gear" goes double for Pisgah.  I carry two tubes a big air, a pump, plugs and boot material, chain links, tool w/chain breaker, Leatherman, Hanger fixer for when I have gears etc.

Overlook on The Black Mountain trail 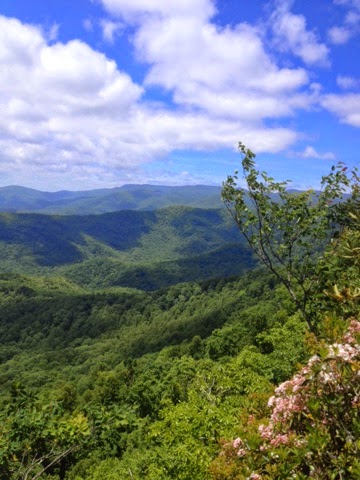 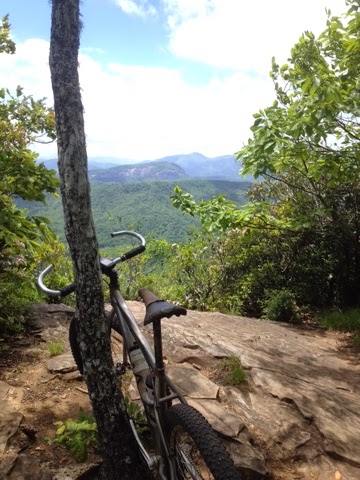 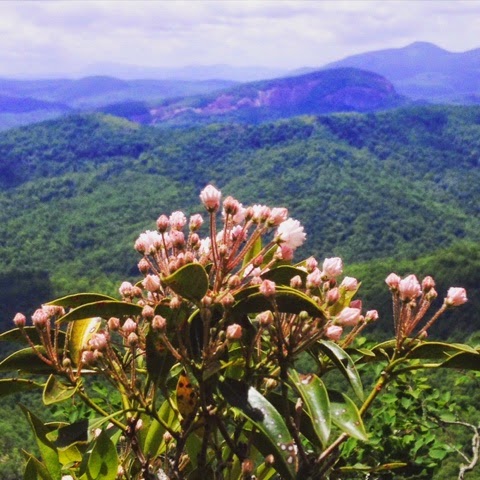 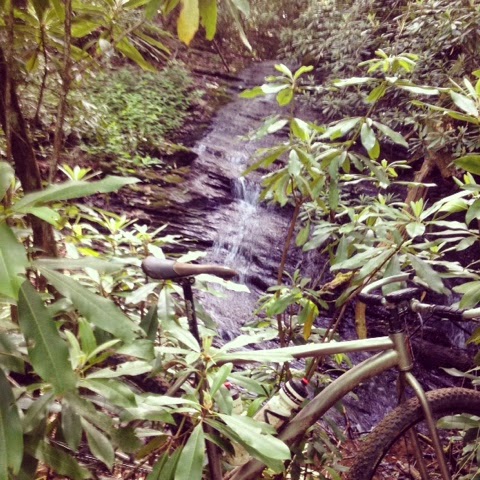 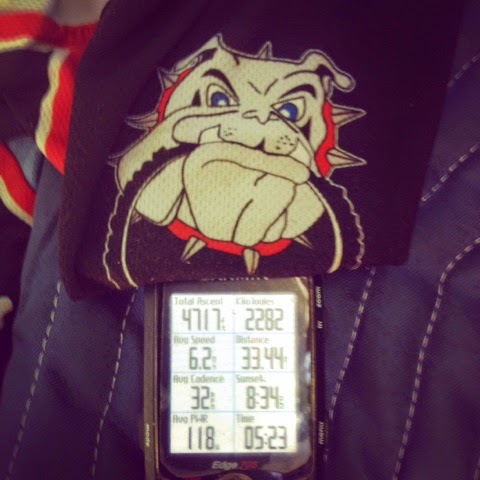 Posted by Unknown at 6:32 PM No comments:

This is a long lost post. We were just getting moving, for real this time.  We had no internet or cell reception for a hot spot at Greenwood Furnace Campground. Then my PC went out. So it got lost in the shuffle.  But with this years TRANS-SYLVANIA MOUNTAIN BIKE EPIC looming I thought I would drop it.

Even though ROCK is in the name, I thought North Jersey has the rockiest trails that I have ridden so far. I reached out to a local, cause the guy at the shop hurt his back last fall after hitting it too hard on his brand new fat bike. Wider Q factor and chasing around youngsters, he said.

So I show up a little early and and get a warm up in with the president of the local club. I guess Tuesday is the day regardless if the official shop ride is on or not. Most thing are up from the Tussey trail head. Ironically there was enough cell signal for my wife to work a the trailhead while I rode.

I headed back to the trailhead for the arranged time. I was happy to see four single speeds coming off of cars.

Plenty of climbing, be it on fireroad or single track, most of which could be considered a rock garden.  Kinda like Wawayanda on the New Jersey's north border with New York, just with more up!  The landscape has some spectacular groups of rock outcroppings to navigate
http://www.imba.com/epics/roth-rock-ride
Posted by Unknown at 7:18 AM No comments:

About half way through, what was supposed to be a 28 mile ride, I figured, if the climbing the stats of 5700 ft, were correct on the file for the route I was taking, that I would be paying for it all on Turkey Pen Gap (TPG).  As I approached mile 22,  those feelings grew.  Then that first look up the stairs should have had me and my 34X19 gearing, scurrying to the road back to the car.  2500 feet in 6 miles is just silly.  The file I had said 28 miles.  I had a little out and back here and there, plus the 3 miles on Squirrel Gap and Cantrell (cant tell if it is a creek or a trail) .  To top that off TPG was so steep, even with the speed coming off the rear wheel, the Garmin read 0.0 MPH and did not gain 1/100th of a mile during the walking sections, which was most of TPG.  The garmin got 33 miles,compared to the 40 from the phone.  Felt like 40.  The file I followed was probably made with a Garmin using GPS for speed and distance, which under states, while the phone app usually overstates, particularly the more you stop or go painfully slow.  So it is probably some where between 33 and 40 miles. 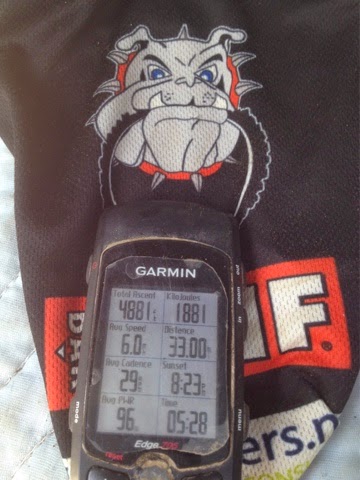 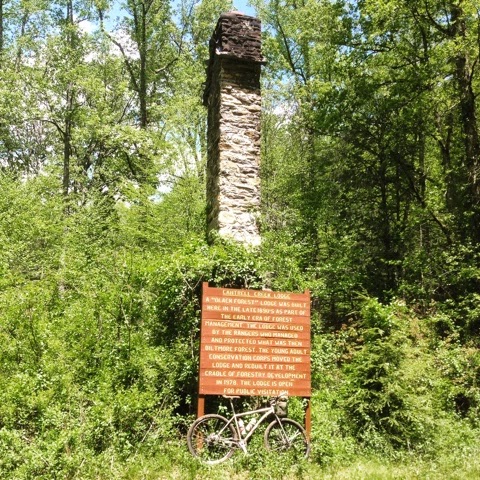 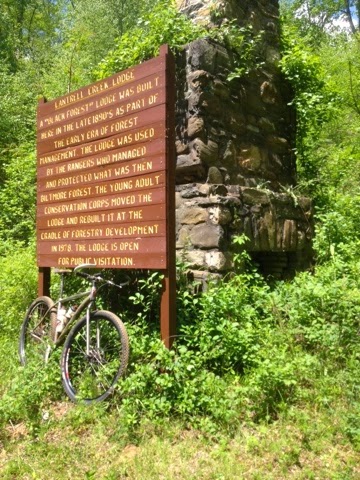 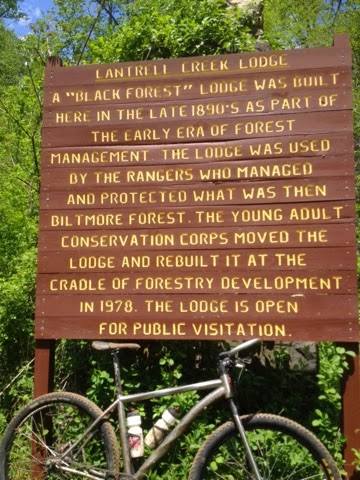 Posted by Unknown at 8:09 PM No comments:

Cohutta the 2nd Half

See the first half here. On the subsequent climb a woman came by.  Most of the girls were gearies, with that and long endurance event being the great equalizer between the sexes, I have humbly accepted the occasional pass by the fairer sex.  Not this girl, she left her gear bike at home because of the muddy conditions.  She ultimately got 6th among the women.  When Bonsby came by a little later he said he has seen her race before and she was a force to be reckoned with.  I dropped her on the next descent only for her to dance away up one of the succeeding climbs.  She seem to climb about twice as fast as me,  a feat I could not match on the DHs.

Now back to the numbers game.  I was still averaging about 10.5 mph at this time.  My metric century was done in 5:44.  Thing were still looking up.  But that damn rest stop #5 would just not materialize.  Mike came up just before the crest of a hill, we both lamented over the 35 miles between rest stops, he was out of H2O.  I told the full suspension riding Bonsby that I would follow him on my rigid bike for the descent.  He said he was not going to go to fast and let me pass.  The fire road turned up again and some time had passed, as well as a few other rider and I started to worry about Mike.  Hoping that he did not crash or flat.  But shortly before the climb out to rest stop #5/4 he passed me.  I had another fast pit and left as Mike was getting his camel back filled, only for him to pass me on, what I call the bonus climb.

My average speed from 62 to 77 miles had started to drop.  There were several riders walking up the bonus climb, I think they were stragglers from the 65 mile Big Frog version of the race.  At least I was going faster than walking pace!

Finally back back at rest stop #3/6.  A volunteer asked how I was liking the single speed now.  I felt a slow grin come across my muddy face and sad the bike hadn't given up yet, but my body may have.

The final climb.  It would end just over the next rise or around the next bend, but it seemed like it never did.  A short false flat or small dip and I was sure it was down hill from there.  After all Mike said the the last Single track was all down hill too, Great I thought.  But first I had to climb the same hill we first came down on the fire road.  Blue sky, That is a good sign we are near the top right?,  Not! The road would turn and keep on climbing.  We had to dodge the occasional car on these narrow gravel road from time to time, as well.

Just when I just about had it,  A bearded single speeder with a full hip pack passes me on what was really the top of the Fire road.  I caught him back on the descent, but confused the entry into the single track, which turn immediately up, not down and he was on my wheel, so I let him pass. I headed into the Quarry loop as Bosnby headed out.  I was dead tired and parts of the quarry did not care.  As for the rest of the single track, I am sure it would have been great fun an hour or two earlier, but now it was anything but the DH single track I was hoping for!  A girl on gears passed me on a particularly SS unfriendly stretch.  I thought she was gone until the hard left hander, that pointed up a moderate to steep climb with rooty technical bits.  She was walking about a couple hundred yard up.  I asked how she liked the DH single track, she replied that she did not have anything left in the tank.  I was walking before I got to her and pulled off as a guy on gears  was coming up.  He saw why I got off and got off as well.  He said "after you", so I remounted after the big root that I was too tired to to attempt and was on my way past the girl, with the guy in tow.  He and I replayed that same scenario a few times, before a definitely pro gearie section came up, where I stepped off to let him do that gearie thing they do.  This Single track may have been loosing elevation, but it was not giving it up with out a fight at every turn, literally.  When it finally did pint down, it was like, "Wait What, that was it?!" and we were out at the power station, not the finish line like TK and I had thought.  Nothing left and nothing left to do but pedal the very slight grade on the pavement back to the start finish area.  Pedal I did, painfully slowly.  I have never really needed a cheering section to motivate me, but here on this plain old, nearly flat stretch of pavement, going about 7.5 miles an hour, through the parking lot, I soaked up every cheer and clap and good job that came my way.

I ended up 15th out of 21 single speeders that signed up, but was the 2nd to last that finished on this day, at ten hours and thirty eight minutes.  I would have been 13th out of 34, with only 21 finishers.

As slow as this was, just two weeks prior to the event, I would have happy with 11 hours, and consider it an improvement over the eleven hours and nineteen minutes that the Tatanka 100 took me, with similar elevation gain, but a completely different profile.

I was happy with my start and the first 20 miles of single track and even the early fire road climbing and I was super happy with my fire road descending through out.  I was good until about 10% over my training duration and miles and I finished and got that mug.  Over the last 10 miles I was thinking I got to finish to get that mug! 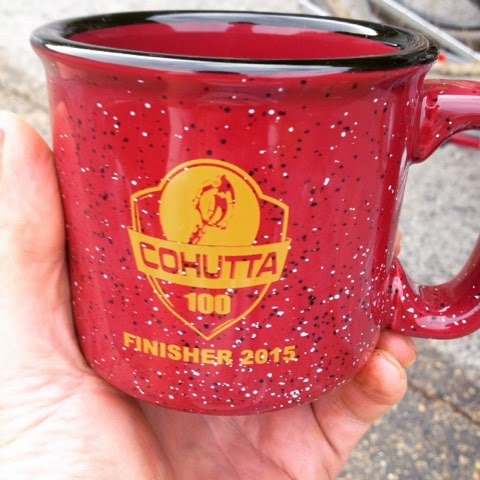 TK had to take this Picture quickly before I fell over! 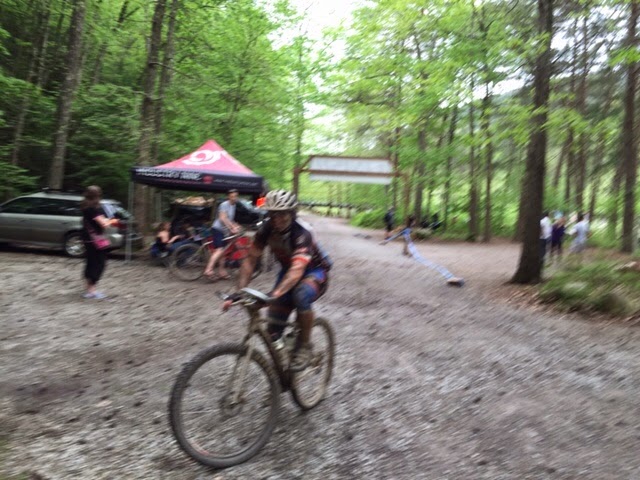 Lunch the day after....
We Crown thee the Hundred Miler

Posted by Unknown at 7:59 PM No comments: