So on February 11th, I get a phone call from my good friend Tom Kruse, Spelled with a "K" not that other guy.  He is taking on the National Ultra Endurance Series this year.  His first one will be Cohutta, which just happens to be only three hours away from Brevard.  Does this sound familiar?  Well the same thing happened for Tatanka.  You guessed it; he asked me to consider doing Cohutta on April 25th, just a scant 11 weeks out.  I had hardly been on a bike since early December and my first MTB ride since November was just February 1st.  It was my first single speed ride since October.

I know, sounds like every racer on the start line right?

Single Speed is my favorite way to ride, but I went down pretty hard on my left shoulder back in early September.  It has taken several months to get it to 95% and I was not willing to risk most of Pisgah on a SS.  Up until early December, I was doing a ton of endurance work exploring the forest service roads and back country single track of Pisgah on my geared bike.  Still pretty harsh on a rigid, but I was learning the area and it was pretty cool.  And then...

With all that, I was pretty sure Cohutta was a non-starter.  I had already planned to refocus on my kettle belling and hikes with Tammy.  But I had until April 1st to decide, if registration did not fill by then.  Following TK's call, I did several endurance rides on the road through our few weeks of winter, but then I decided to try something completely different.  Just two rides a week (one long, one short), only on my single speed and only mountain biking, two kettle bell sessions, some yoga, a hike and /or the occasional walk per week and log it all on my special TSS spreadsheet.  TK noticed all the SSing I was doing and said, "You're not thinking about doing Cohutta on a SS are you?", like I was crazy or something.  I said if I was doing it, it would be on my favorite bike.  He said I could put gears on it.  I said "Uh Uh".

When I started, I was on a 34X22 and North Slope was darn tough,

I added Lower Sycamore for a little fun.  That first ride was 11 miles and it was rough.
Was I nuts even considering doing 10 times that much in 10 weeks?!  I added Upper Sycamore the next week.  In a month, I replaced Upper Sycamore with Thrift Cove and then switched out lower Sycamore for Upper. It was a good month and a half before I changed to the 21t cog.  10 more days I was on the 20.  Finally Thrift for an FTP two fer 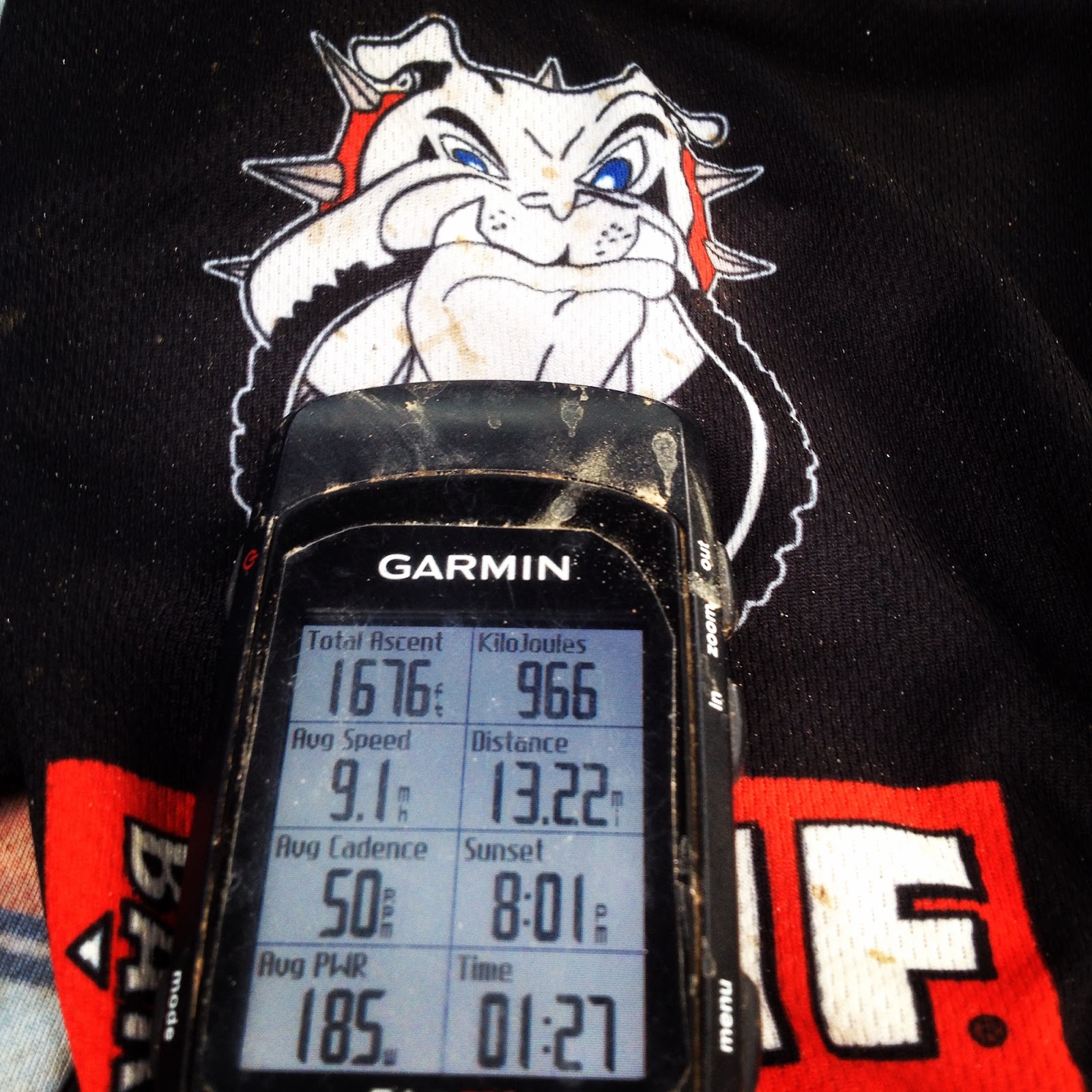 I had been adding about half an hour each week to my long ride.  April 1st came along and we were hosting at Cascade Lake.  I had been thinking about riding up the 6.5 mile Cascade Lake Road to Dupont from camp for my long rides.  I was not relishing this on a SS.  Long and gradual and then the reverse coming back down with that steep last nut heading up Little River Road.  Tammy kept asking me geared or SS.  I said "I do not know".  At the last minute I decided to stick with the SS game plan.

Along with the kettle bell strength training, I had been working on standing a lot.  My average speed started just below 9 MPH.  11+ hours for Cohutta then!  My AVG MPH slowly climbed to 9.5 over the last few weeks.  Better but still 10+ hours for Cohutta, if I could hold it.  My rides did seem to have more climbing per mile than Cohutta, but still.  I had hoped to go to a 19t cog, each tooth meant more speed but harder to turn over on the steeps.  It was getting close to go time.  I had to switch wheels because a bearing went out on my older Powertap hub. 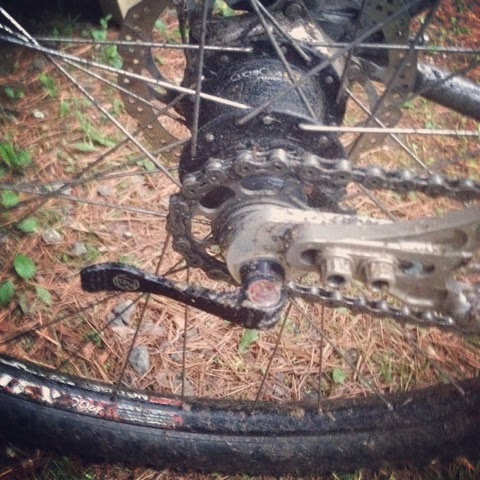 It meant a tire switch, so I put on the steeper cog as well and went for my last long ride.  Five hours, tapering down from six the week before.  I felt faster and slower all at the same time, it was weird.  I thought my wheel size setting might be different between hubs, but my AVG speed seemed up.  Later, the down load would confirm the 10 MPH AVG.  Now I have a shot at 10 hours.

Compared to the 20t the 19 gave me a little trouble on the steeps, but not much, and some steeps seemed easier.  I could pedal in more situations.  I could stand more effectively on lesser grades, 4% and up instead of 5% and up.  Seemingly contradictory, I could stay seated and maintain momentum, instead of coasting and then standing on rollers.  That is where I picked up half a mile per hour from the same ride (except in the wet, plus a bonus climb) as 2 weeks ago.  Even with some training effect and I had my Black Sheep titanium fork back in place of my Salsa steel fork, some of it has to be the 34X19.  Don't ask me which elevation is correct.  Just trust me there was more on the 4/17 ride than the 4/4 ride.
.


After the Little River Crossing 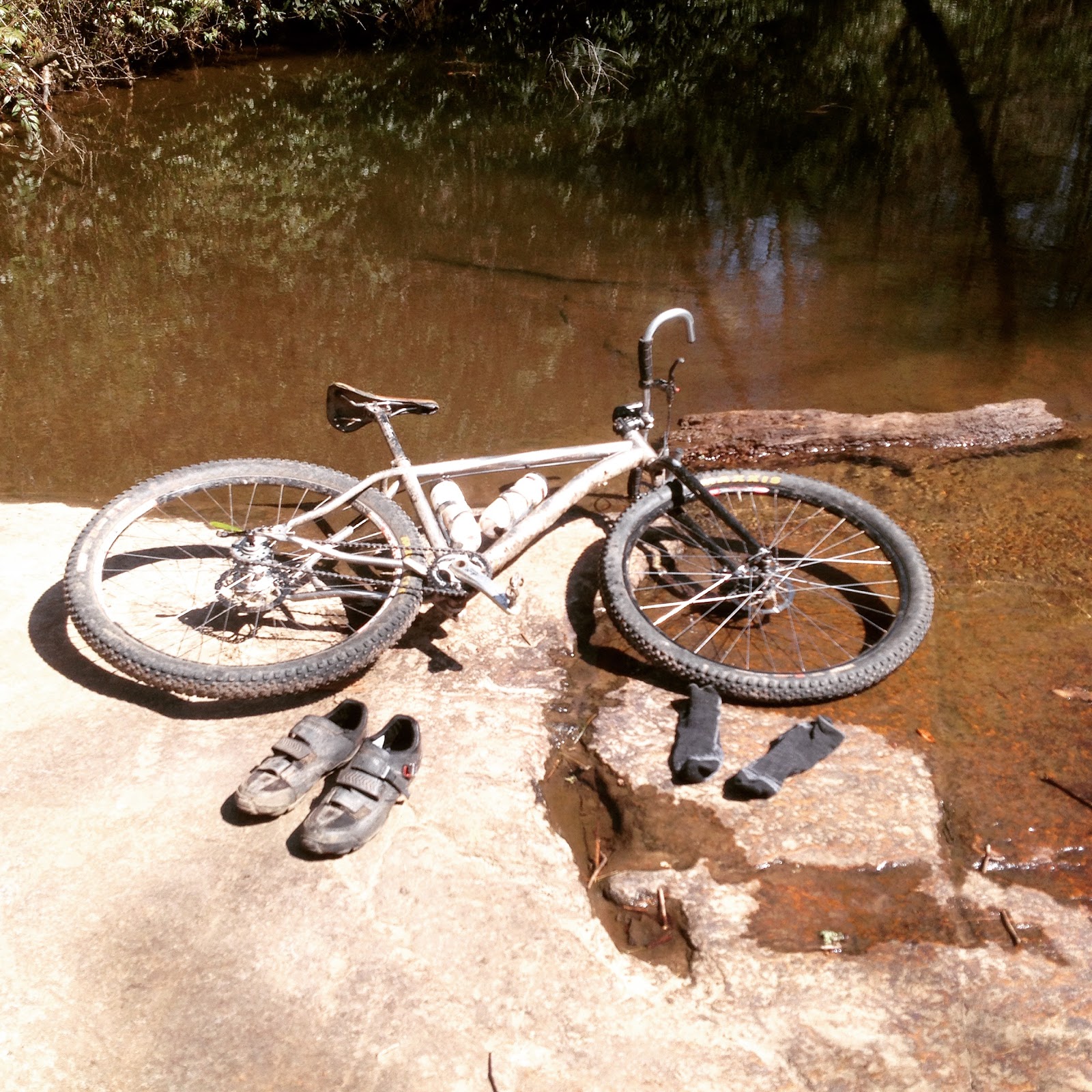