If it rains wait at least 2 days to ride the following part of the the Maah Daah Hey trail!

Don't take my word for it, click on the picture for a closer look 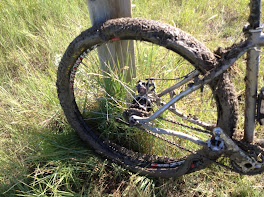 A good storm passed over the National Grasslands Monday night. So I decided to not ride on Tuesday and extend our stay one day, enabling a Wednesday attempt of the Maah Daah Hey. After getting the 411 from Dakota Cyclery in Medora and my second ride to the south, I opted to start at road 50, about mile marker 73, instead of at CCC trail head at mile 98. Tammy waited at the trail head for half an hour in case I found that it was still too bad to ride. But it sucked me in and was just OK enough for me to keep going, thinking "This is not too bad and it should get better as the nice sunny day and low humidity goes on". Well I was so wrong. I would get the bike muddy and then shake some off on a fast section. This pattern repeated over and over again. Each time adding a little more than would shake off. Then the turn for the Ice Caves. "Oh, I want pictures of that!" I thought to myself. I had to give it up, after only a tenth of a mile, maybe less. I had to find a stick and dig mud and grass out of the bike, only for it to start building up immediately again. I am glad I brought the derailleur free bike with lots of mud clearance. While there was some sweet single track, it was too far and in between mud, creeks, rivers, deep ruts and trails overgrown with tall grass, sometimes all at once! The scenery is spectacular in places, but starting from Bully Pulpit was pretty damn scenic too and I could see most of this scenery from the dirt roads. I have over four hours of video, I doubt that any of it is that interesting. Just tall grass, cows and me finding my way through creeks, rivers and bogs.

Maybe after a drought, this trail may be OK. But fun, I am not sure. If you want to test your resolve and stubbornness, this is the place. Ride south of Medora if you want. I considerthat  fun single track, before it overgrows. According to the shop, the sequester has taken a lot of park workers out of the equation and trail upkeep has been suffering. Hopefully they get it together for the August race.

I wanted to stay on top of my H2O. I filled up a bottle at the camp Magpie hydrant, with water nearly as brown as the creek of the same name that I just crossed. I still had most of my Camelbak and part of the other water bottle.

Then at about 29 miles, "I had all I could stands, could stands not more!" to quote Popeye. With no race on the line, I jumped on the fire road for the next 50 miles or so. I did detour to the camp Elkhorn trail head in hopes of finding clear water. The water was clear, cool and refreshing. As it was a long down hill dirt road to camp, I thought I would try the trail again. I soon turned back and took my knocks on the dirt road, preferring the climb to the mud and the tall grass trail, that only hinted of a trail.

I was temped once more. With less than 10 miles to go, the dirt road crossed the trail again. The trail I saw from the road looked good. It turned out that once again the cow path was rideable, but the MDH only paralleled it for a short while before getting back into deep ruts obscured by tall grass (a bad combination!). I went back to the dirt road. There was a short section on 94 (apparently legal to ride a bike on, in North Dakota), before exit 24 to Medora and paved bike path into town, where Tammy was waiting for me.

I will reiterate,  for a good time, ride the Deuce from the Bully Pulpit trail head a few miles south of Medora!