We left NC in the rain and the rain followed us most of the way to Arkansas.  It was gray and gloomy, but the there was a break in the rain.  I took advantage of the day and rode the 27 miles the point to point of the WOMBLE trail, early November of 2015.  The WOMBLE is leaf covered this time of year and it is still humid, but cool enough, not to be oppressive.  The trail WOMBLE rolls along,, mostly, with the occasional steep climb, of short to moderate duration.  Mostly small rocks under the leaves, like big gravel, which made for a rough slower ride.  There were a few sections, though, of smooth and flowy trail too and a really cool knife edge ridge that looked down on the river and out across the valley to other mountains. 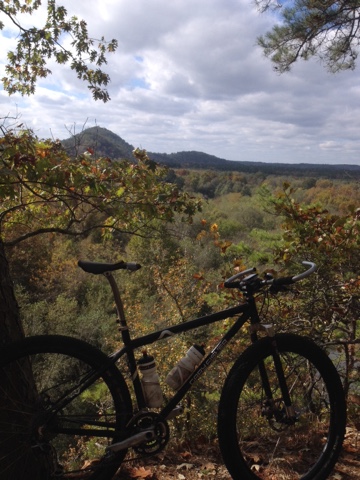 Plenty of roots and exposure, not the fall off a cliff kind,but in places it could be dozens of feet before a tree stops your fall. That really keeps you focused, there is some tech and switch backs as well.  Plenty of creek crossings, most of which were pretty dry, due to lower than normal rain fall this past October.  Even though it rained the 2 days prior to our arrival..

For the most part the trail is pretty easy to moderate, with it's moments of challenge, far and few between as were the roads, you really felt miles from anywhere!  The length does bring up the challenge aspect some and not being a loop means either a shuttle or out and back, which would double the length.


Note:  The Singletracks.com phone app does not show the section north of the lake.  Cross the bridge and the trail is on the left, just after it.  I missed because I had to go from memory and there was construction on the bridge at the time.  The north section is just over the bridge on the left or west side of the bridge.

Trail blaze white and all the major road crossings have a big WOMBLE trail sign.  Until you get to mile marker 27, coming from the SW, that is.  I am not entirely sure that the section north of the lake is still part of the WOMBLE.   I think my Garmin shorted it about 2 miles, due to the twistyness of some sections of the trail.  I finally did find the trail head, but had already called my shuttle (Wife) and she was already on her way.  By the way thanks Tammy!
Posted by Unknown at 6:03 AM