Truly Epic ride! I met Travis Olson on Strava, where I asked him about his North Fork Death March ride. I missed the second one, though, just couple weeks back. He also told me about the HC road climb up to Spruce Knob.  On a very wet, chilly, foggy sometimes rainy day, he brought a small crew to do the Epic. This 40 plus mile, up road/down trail (at least it was a West Virginia DH, plenty of elevation gain on the way down) IMBA epic. We could have shuttled up to the top, but then we would have missed a whole bunch of climbing and sketchy road descents, with gravel showing up randomly on Lower Timber Ridge rd, making the wet leaf strewn sharp curves even that much more... um sketchy. We would have also missed out on the downpour that hit as we got onto route 33 back to Seneca Rocks, getting back exactly at sunset!

The fun started at mile 24, where Huckleberry leaves Spruce Knob. With little elevation lose, the first couple/three miles was nearly constant rain slick rock gardens. Rob got a flat early and Travis pumped it up to see if the Stan's would seal it. It got soft again when they got down to us (Mile 27). A repump and letting the Stan's pool at the hole a while, was the next try. Then the plug kit came out and held for the rest of the ride(Mile 29). It was a pretty small hole in the sidewall and not a scrape or slice ( I had no luck plugging a sidewall slice early this year).

Huckleberry is gnarly and went from wet rock gardens to wet roots and mud. We had not gotten far when a hiker couple leap frogged Mike, Jason and I, while waiting to regroup. The hikers were making better time than us and we never did see them again, they took different turn we supposed. But they were nice enough to let us know about the mechanical. Up till now we had gone through several fits and starts as Rob was learning his rock skills, as I wrote earlier it was plenty gnarly (it is not possible to overuse that word in regards to this trail!)

Although we had not descended all that much by that time, the chilled to the bone sensation we experienced at Spruce Knob and the other times we stopped was all but gone now. Particularly right next to our friend the Mr. Pine Tree. Mike made his own deer bed in the straw grass and seemed quite comfy. Totally different thermocline or should I say Coldocline?

We then connected up with the Horton trail, mostly down to falls on Seneca creek, sometimes steep and nasty(did not want to use gnarly again, HA!). 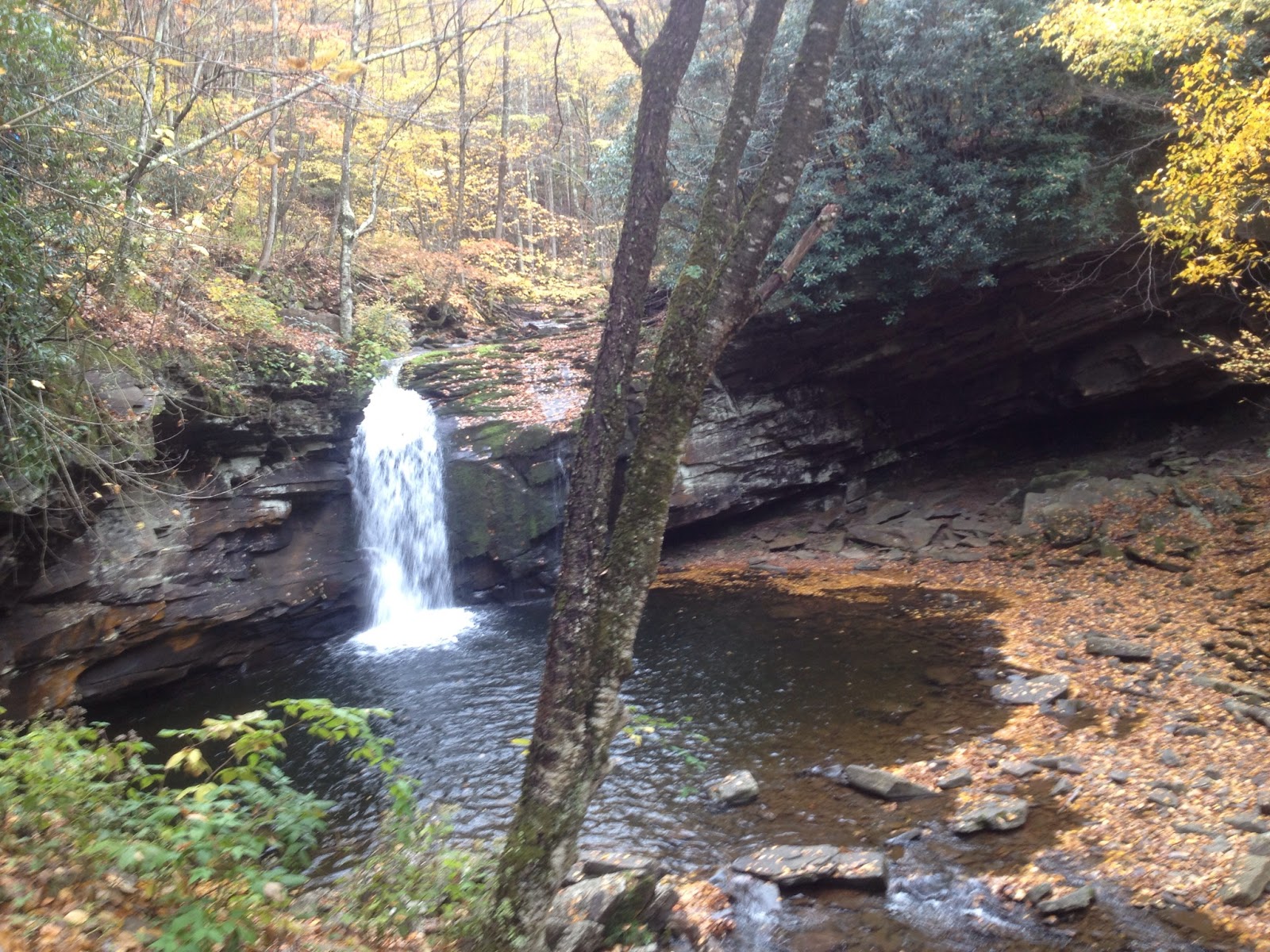 Crossing the creek was an adventure all on it's own. So recently out of hypothermia weather, only Mike attempted to ride across. Jason literally skated across the rocks he tried to walk across. Travis was the first to try the big down tree that spanned the creek, Success! Rob tried to scoot along, till I grabbed his bike, to hand off to Travis, so he could walk. Travis waited at the ready for Rob and then myself, while I kept my bike for balance. The knots where branches use to have been, made it hard to to make small steps. Alas no swan dives and ironically Travis submerged his foot as I got to the end.

Now for the 1.5 mile hike a bike out of Seneca Creek. It was tough going, I tried to ride as much as I could (it was easier than lifting up my legs hiking), but probably rode less than half of that steep greasy,off camber, slick as snot rocks and roots.

Now at the intersection of the Allegheny trial. Only 6 more miles of trail to go! But we had plenty of greasy barely doable climbs and several momentum robbing down trees on the DH's. We had been riding in the clouds since well before Spruce knob and it was getting thick and the next turn was a hard one to find. A little back track to be sure we were on the correct path and we start what would be the final descent. Steep and sketchy, at times, we were losing elevation quick. This turned into a narrow off camber switchback descent to Whites Run rd. All of a sudden we were out of the clouds and the ground was dry, and then it was over except for the pouring road back to the cars.

Truly epic ride in epic conditions! With an epic crew, just the nicest guys;
A youngin with only BMX saddle time (what he lacked in conditioning he made up for in skill)
An ex runner turned triathlete/MTBer with new knees and lots of enthusiasm.
A bike shop owner, with plenty of skill and endurance.
And the Man, ride leader, Travis Olson. Who watched over his flock, better than a border collie.